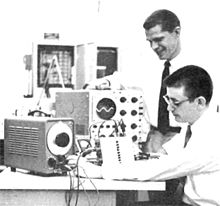 We couldn’t let 2016 slip into history without recognizing a milestone anniversary. Fifty years ago, research engineer Sir Charles Kao published his findings on fiber optic communications in a paper read by his peers.

Copper cabling was the transport medium of the day and what Sir Kao proposed was quite remarkable. His 1966 paper detailed experiments involving laser beams traveling down strands of optical glass fiber, which eventually earned him a place in history as the ‘Godfather of Broadband’.

But lesser-known to history are the three other researchers who laid the groundwork for Sir Kao’s findings. Pioneers Harry Oliver and Bill Linkow, two of the founding members of the FiberPlex brand, worked with technology developed by Dr. James R. Biard a few years earlier -- in 1963 -- to transmit light through glass 'fiber' using then-new Light Emitting Diode (LED) technology. Dr. Biard had developed the LED at Texas Instruments and was granted a patent in 1962. By 1963, Oliver and Linkow had used one of Biard's LED prototypes  to create some of the first optical links.

The rest, as they say, is history.

More than 50 years later, fiber optic communication has impacted nearly every aspect of modern life, from AV and avionics to medicine and the military. Most of the data flowing across the Internet today travels in the form of light, pulsing through fibers made of glass.

Subsequent innovations in optical amplifiers, semiconductor lasers and wavelength division multiplexers (WDM) have made long-distance communications more affordable and accessible. We can reach across the continent and into homes, transfer data between data centers, and transverse a maze of interconnected websites, search engines and social media because of fiber optics communications.

According to The Optical Society (OSA), fiber optics will continue to revolutionize data communications, replacing copper links as a way to, say, transfer a 1GB movie in 31.25 microseconds. In addition, fiber with cloud computing will bring an explosion of growth in video-sharing, video conferencing, and online gaming. And, expect fiber optic communications to enable more remote learning from across the world.

Optical communication has now become essential for economic and societal growth, and transmission capacity continues to grow with each decade.

Today, FiberPlex Technologies, LLC, is the continuation of a legacy in fiber optic technology and secure communications that dates back to the 1960s. Now headed up by Harry Oliver’s son, CEO Buddy Oliver, and daughter, CFO Cyndi Peters, FiberPlex makes fiber converters and multiplexers and has established itself as a leader in TEMPEST technology and secure communications. Thanks to pioneers Sir Charles Kao, Dr. James R. Biard, Harry Oliver and Bill Linkow, the world is more connected and information more accessible than ever dreamed possible. We can’t wait to see what the next 50 years will look like!