It's Fiber All the Way for Hillsdale College 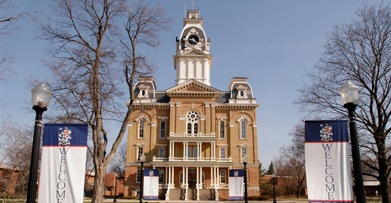 When it comes to broadband AV, it’s optical fiber all the way for Hillsdale College in Michigan. The independent private college started running high-speed, secure optical fiber across its indoor track using our audio optical technology in May and is now gearing up for another, longer optical run that will shuttle multimedia across its campus.

In the next few months, the College will roll out the FiberPlex WDM-16 multiplexer into existing fiber strands for moving large multimedia files from its auditorium and sports fields to a control studio on campus.

Hillsdale’s Director of Technical Media Ted Matko is working with AVI Systems, headquartered in Eden Prairie, Minn., on the project and expects the WDM-16 active wave division multiplexer to save the college the cost of trenching in new fiber in some areas of the campus by reusing existing optical runs, which will generate substantial savings.

“We needed capacity to get video from the athletic fields, the auditorium, the fine arts building and elsewhere to our new control studio about a quarter of a mile away. Multiplexing will make it cost effective to do that,” said Matko, explaining that FiberPlex’s WDM-16 lets him multiplex 16 separate channels at 3Gb/s each onto two fiber pairs used by the campus network.

The additional channels are needed to stream the college’s live volleyball, football and baseball games across a quarter-mile distance from its athletic fields to the control studio, which was originally the College’s bookstore but now serves as the command center for media control and the head-end to the LTN feed picked up by the networks. The College also shuttles media to its control room from its auditorium on a regular basis for guest speaker engagements.

Previously, in May, the College installed FiberPlex LightViper optical audio snakes for its graduation ceremony held in its indoor track facility with 5,000 people in attendance --including commencement speaker U.S. Senator Ted Cruz. A LightViper snake connected the mics on stage to a mixing console at the back of the field some 265 feet away over fiber optic cabling. Another LightViper optical snake routed the audio channels – via optical cable – from the track to the studio control room across campus.

All audio is controlled and networked through Peavey’s MediaMatrix audio control system.

“This is a standalone digitally networked sound system that can handle just about anything they want to do from the field. If they need to change anything, they just click on a control page from their laptop and now they’re switched over to any device or location they want through optical fiber and the LightViper system,” said Andrew Walker with Avtek AV, who designed the system and recommended the LightViper optical snake instead of copper snake because it can transport audio error-free and transparently over greater distances, by a 400:1 ratio compared to copper.

In the next few weeks, the College’s LightVipers will be joined by new WDM-16 multiplexers that will take the school’s multimedia endeavors a step further by routing video over optical fiber to the control studio elsewhere on the campus for full head-end control of media files.

Hillsdale College is just one example of how fiber optic technology can be leveraged for educational and communication purposes.