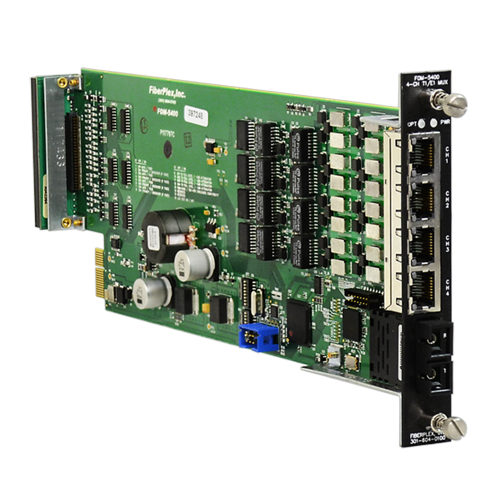 The FOM-5400 is a 4 channel multiplexer that provides electrical-to-optical conversions for T/E carrier communications. It has four RJ-48C and one fiber optic transceiver. The card is designed to pass all Alternate Mark Inversion (AMI) signaling regardless of the specific line encoding, making it transparent to any handshaking protocol or standards. Each channel is independent of one another and may also be operated at different data rates.

The card incorporates an auto-detect function on the RJ-48C, which determines the correct pinouts for the transmit and receive pairs when a Cat5 cable is plugged in. This allows users to use either a straight or crossover cable, which can be extremely useful to users who are unaware of cable types and can also save time on network configurations.

In addition, the FOM-5400 offers much longer transmission distances than traditional Cat5 cabling. The distance limitations for both T1 and E1 as specified in ANSI T1.403 is 6200ft (1890m) for T1 and 4800ft (1460m) for E1. However, singlemode optics on the card can extend the distances up to 80km. A typical link consists of two FOM-5400, one at each end of the network with a fiber optic cable between them.

All 4 channels are independent and may be operated at different data rates.