The VIM-1808 is the clock master in the system. I has the ability to generate it's own superiour quality Word Clock, or alternately accept an external Word Clock. There can be only one VIM-1808 in a given system. The VIM-0808 is a clock slave and reuires a VIM-1808 to operate. It has clock output for synchronizing external equipment and for distribution of clock.

Both the VIM-1808 and VIM-0808 feature a fiber pass through transmit connector which provides a freshly driven optical signal which can be daisy chained to additional VIM-0808 units for audio distribution applications.

The system features a “control” connection which is a TTL data port which appears on an EtherCon® connector. It allows LightViper accessory devices such as the DMX4o (DMX lighting control) or MD3 (RS422/232/MIDI) to be connected to the unit. 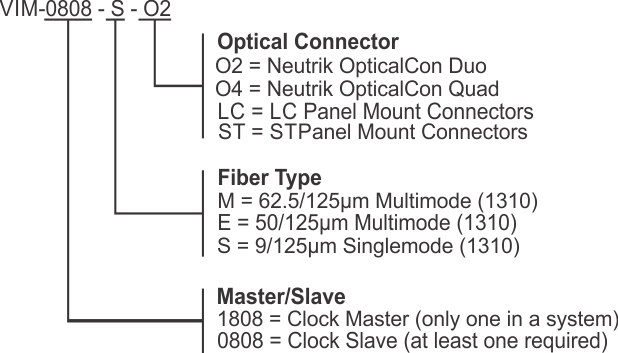